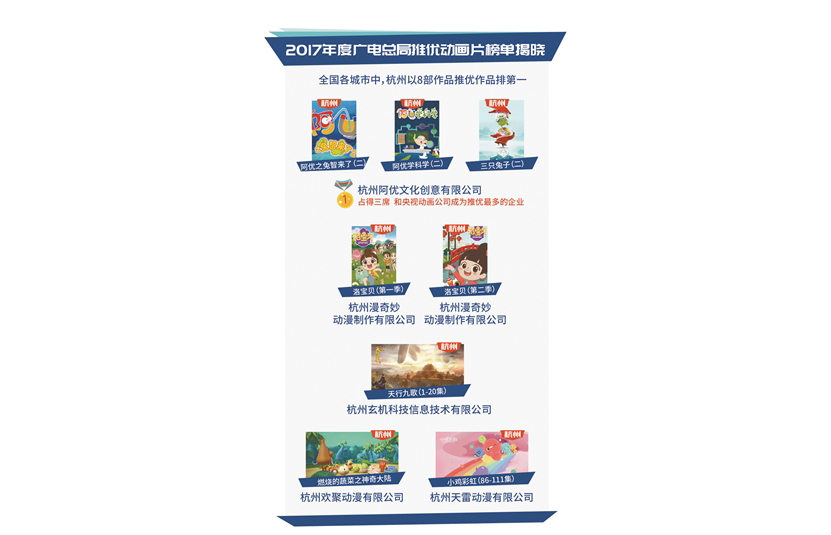 On September 6, National Radio and Television Administration issued a circular on the production and distribution of TV cartoon programs in the country in 2017. Zhejiang and Hangzhou animation game enterprises had outstanding performance, ranking in the first place in three aspects across the country.

This heavy list records the hard work of Hangzhou animation game companies in the past year. It also served as the best recorder of Hangzhou to build itself into an "animation capital".

Over the past 10 years, Hangzhou's animation game industry has been thriving. Behind the boom is the city's consistent policy support. In particular, 18 new policies introduced last year have effectively promoted a new round of industrial development.

In November 2017, Hangzhou once again rolled out new deals for the animation game industry in the city. The general offices of the municipal CPC committee and municipal government issued the Circular on the Implementation of Measures to Promote Better and Stronger Development of the Animation Game Industry in Hangzhou. It was the fifth round of policies of Hangzhou for boosting the animation game industry. The new policy comprises 18 articles, which are separated into the four chapters of encouraging the creation of excellent works, the exploitation of the overseas market, the launching of capital operation, and the strengthening of public service.

In 2017, a total of 43 excellent animated cartoons were recommended for broadcast throughout the country. Eight works from Hangzhou were on the list, the greatest in the country.

The gradual improvement of the industrial layout has also given Hangzhou a bigger push to create itself into the capital of animation.