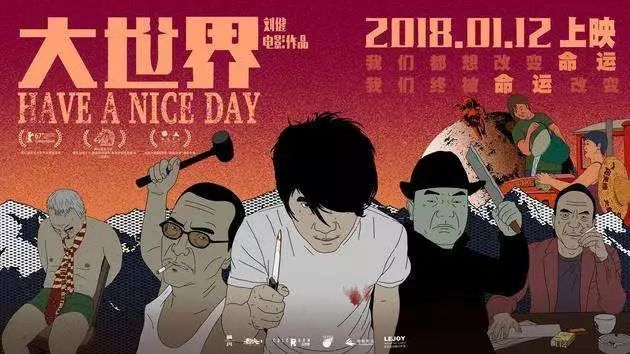 The Academy of Motion Picture Arts and Sciences （AMPAS） recently released the list of 25 excellent animated films shortlisted for the Best Animated Feature Film for the 91st Academy Awards. Two Chinese language animated films, Have a Nice Day from Hangzhou, and On Happiness Road from Taiwan, were submitted to compete with 23 other animated feature films from around the world.

The film Have a Nice Day was selected for the main competition at the Berlin Film Festival in early 2017. It was the first time in the history of Chinese language films that an animated film was selected for the main competition of the three major international film festivals. It was also a renewed interest of the Berlin Film Festival in an Asian animated film 16 years after the appearance of A Voyage of Chihiro of Hayao Miyazaki. Have a Nice Day was produced by Liu Jian, an associate professor of the School of Film and Animation Arts, China Academy of Art, who undertook the work of scriptwriter, director and painter over three years. In the same year, it won three nominations for the 54th Taiwan Film Golden Horse Awards, and finally had the honor to win the best animated feature film award.

Liu Jian was born in 1969. In 2009, he created the first animated film Piercing Me, winning numerous awards. It was shortlisted for the Feature Film Competition of Festival International du Film d'Animation d'Annecy, known as the "Animation Oscar".

Indie Wire, a famous film media, made a comment on Have a Nice Day：“If Quentin's Pulp Fiction is made into an animated film set in contemporary China, that’s probably what it looks like.”